During my summer residencies in Berlin in 2017 and 2018, I conducted observations and activities in the central districts of the German capital, related to the analysis and comparison of the quality of visual space. The pretext for reflection was the desire to deepen the understanding of social differences, to outline the framework of the identity of selected places and to capture their essence. Finally, the project focused on printed materials, stuck and painted messages, such as posters, advertisements, announcements, inscriptions, stickers, etc., creating a colourful background of the city. Paper messages accurately reflect the process of information overproduction in the modern world. In this case, the trash information can actually litter the space in which we live. What content appears on such media in Warsaw and what in Berlin? Whenever possible and as the project develops, I will also compare the visual space in other cities. Why were they hanged? Is it purely advertising, commercial content, or maybe a grassroots initiative, DIY, with a social message? Are we eager to look at them or on the contrary? What emotions do they evoke? Do they encourage action or annoy? And above all, what is the level of their aesthetics? Do they depend on location?
While collecting visual information and creating a collection of messages characteristic of Berlin, my attention was drawn to places intensely covered with posters, walls and pillars with a mass of accumulated paper, damp and falling off under its own weight. One of such rolls of paper served as my research material, and then became the basis for creating the object “Olfactory image”. Cutting off a thick roll of posters glued on top of one another allowed me to observe its subsequent layers. The exterior is in very good condition, but the closer to the center, the more of dampness, mould and intense odour.
The creation of a small object (20×20 cm base) with such a strong and unpleasant smell is aimed at examining the possibility of transporting it, storing it and keeping it for further experiments. At the same time, it is a harbinger of the possibility of creating larger objects of this type in a safe way, or designing the entire interior, which you would be able to enter and smell the intense smell of old paper from the street. Would you enter such a room?
The finished “Olfactory image” was photographed with the background of the Berlin skyline and very sterile, monumental and futuristic government buildings (Marie-Elisabeth-Lueders-Haus, Jakob-Kaiser Haus, Paul-Löbe-Haus).
Common reflections and an outline of the project made during stay in Berlin with Agnieszka Pakuła.

A project on the border of two areas of my research: “Urban Space * Immersion” and “Inside / Outside”. 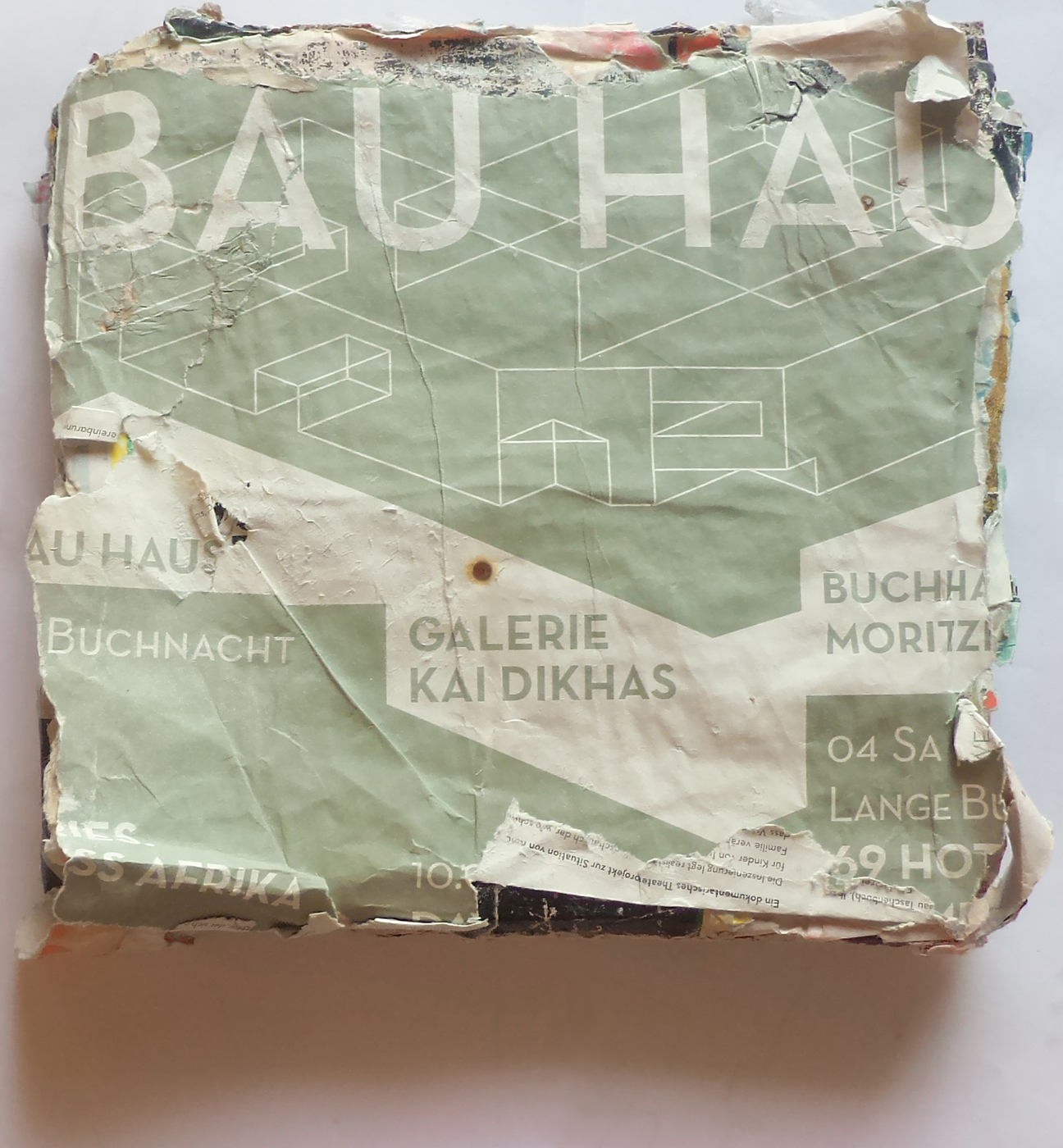 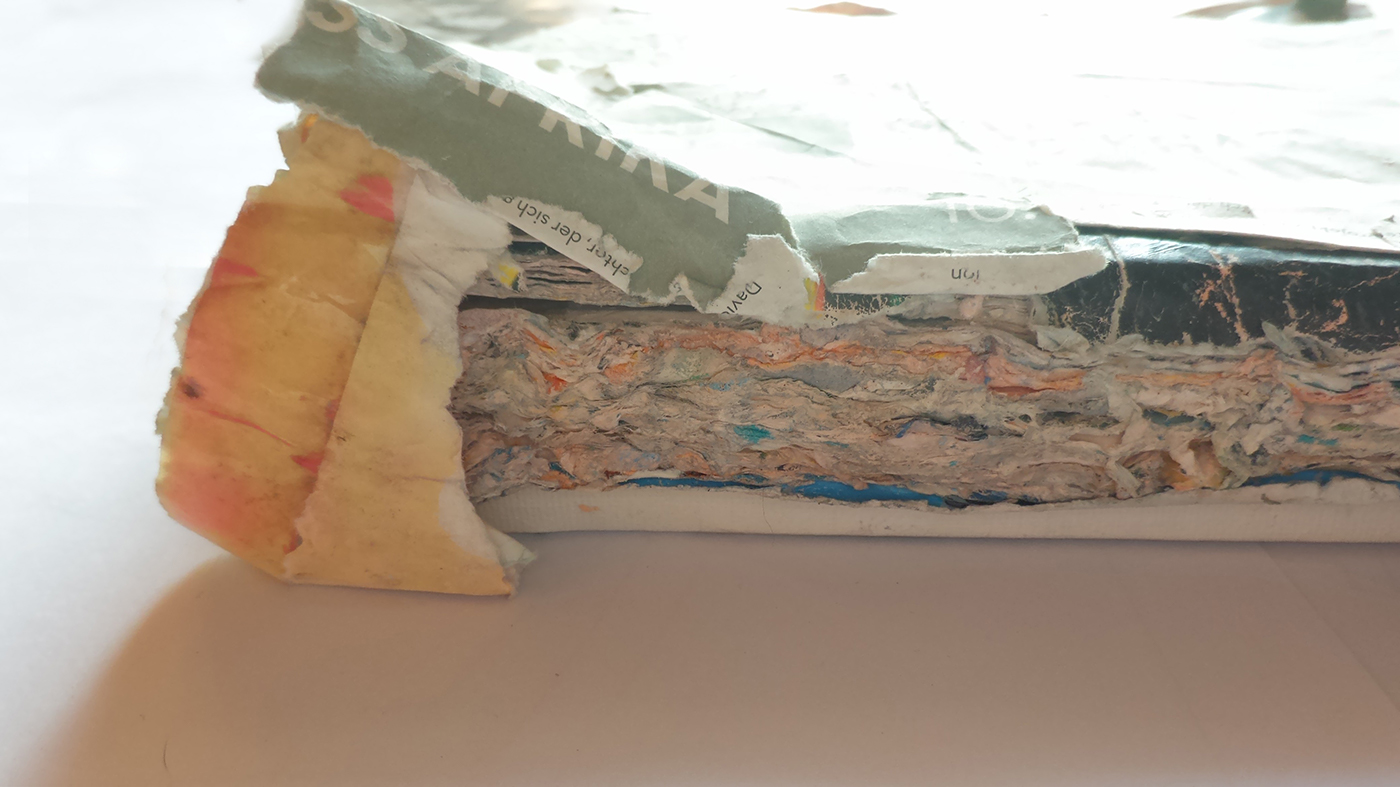 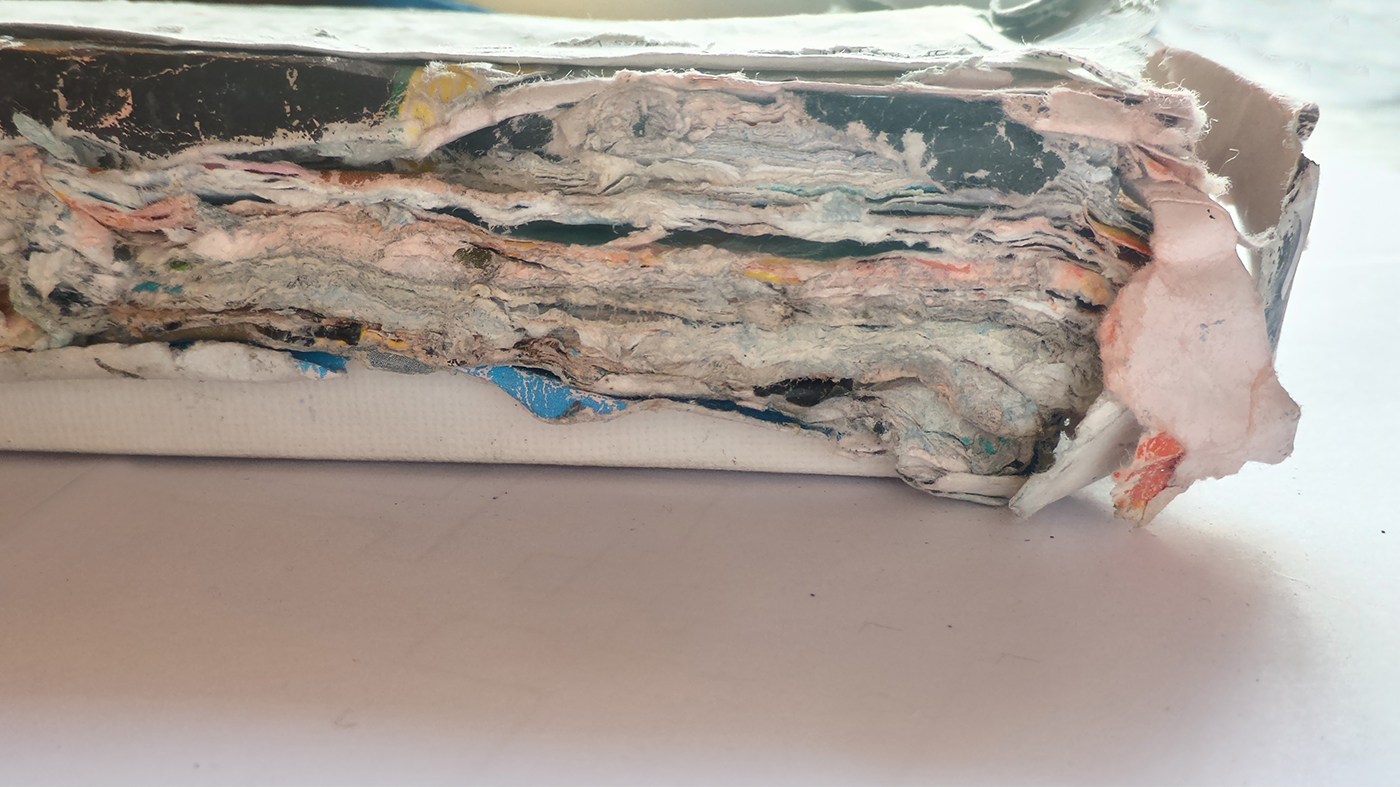 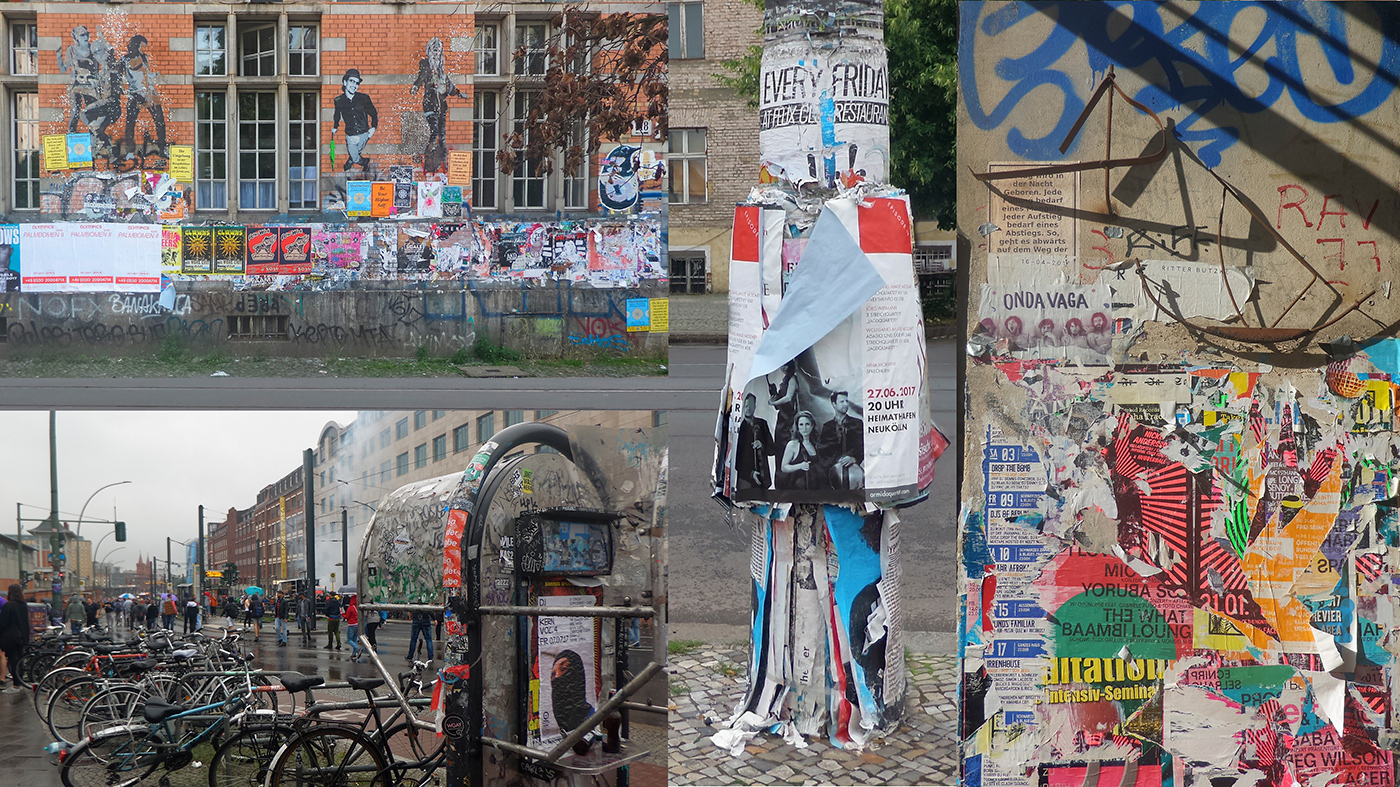 Walks in Kreuzberg, Mitte and other central Berlin districts. Observation of the visual space of the city. 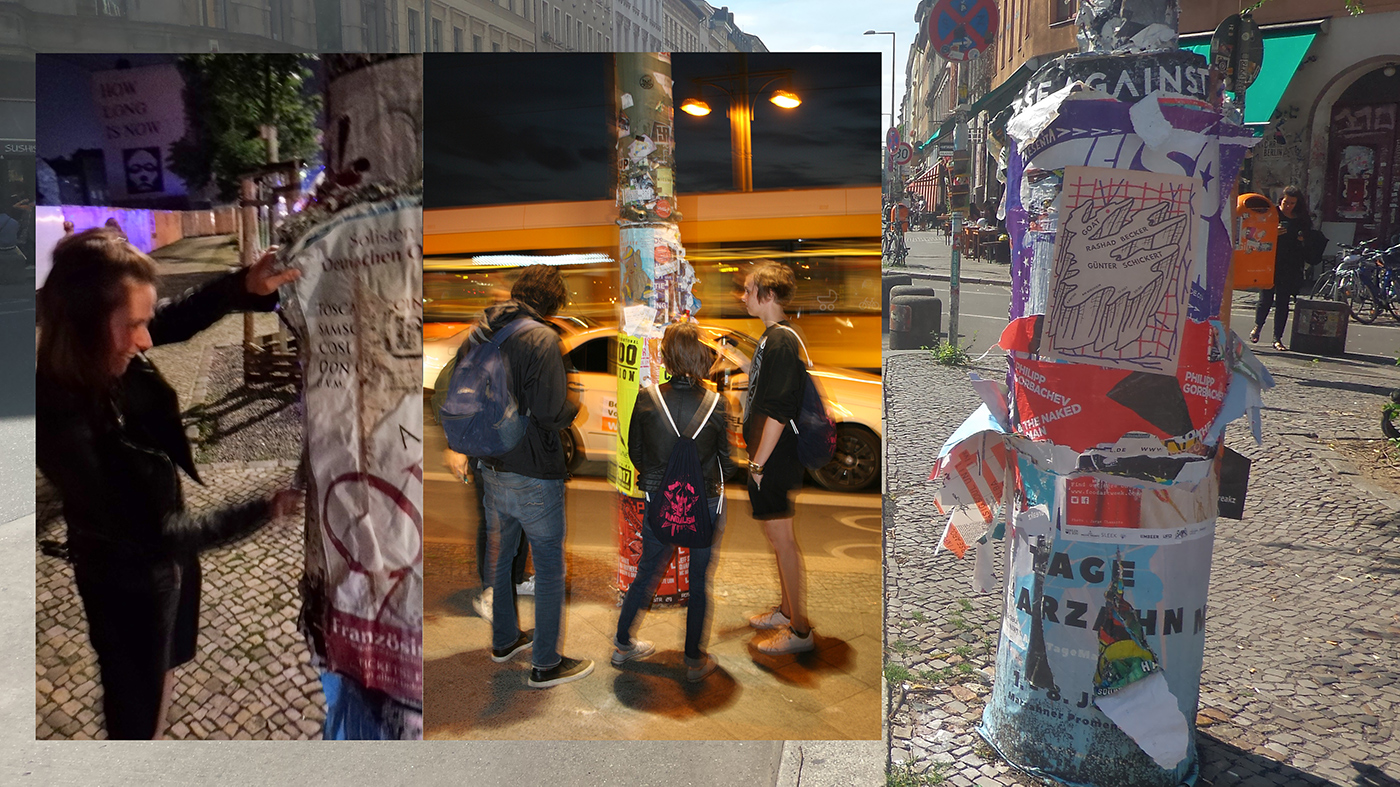 What do I find inside such a heavy, poster-covered pole? Time to find out... 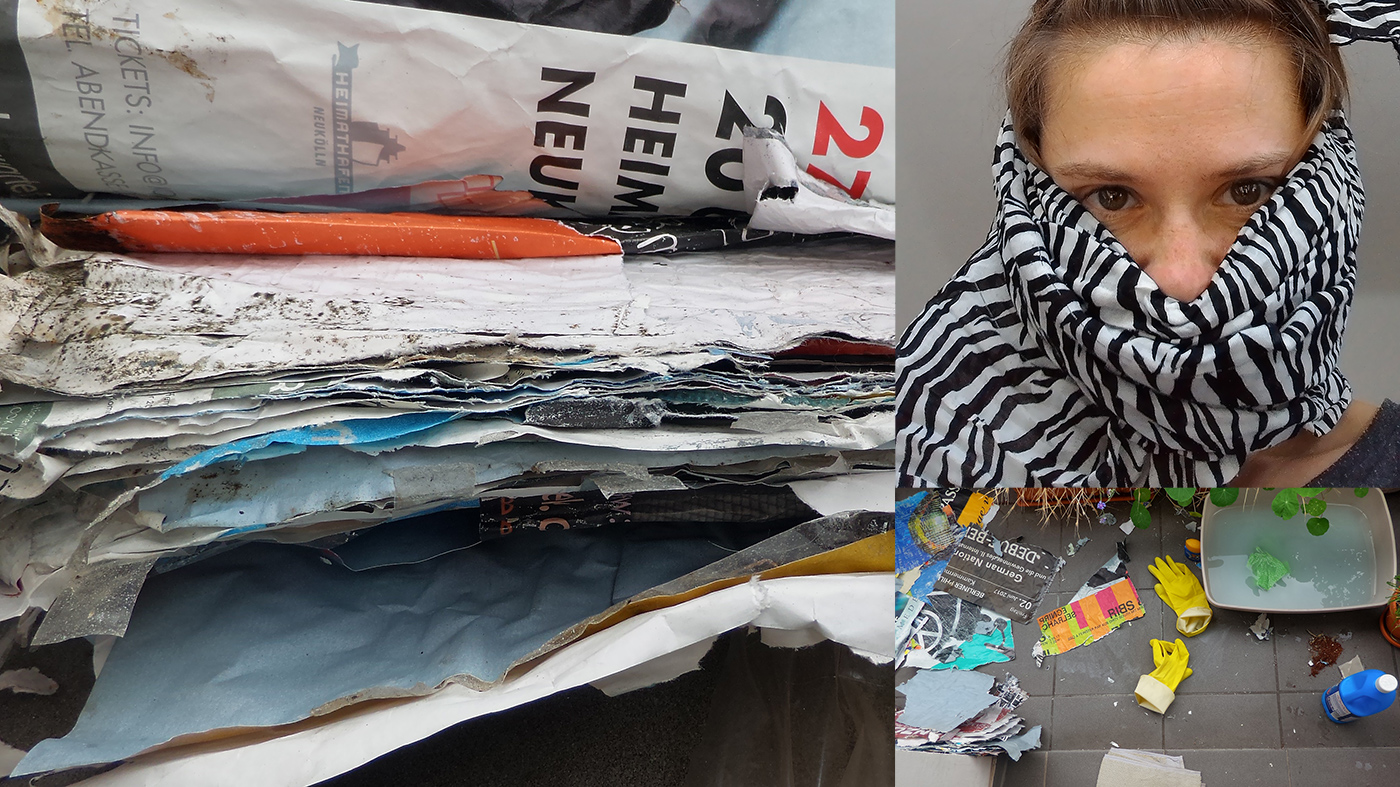 There is a lush life going on between the layers of paper. The odor is equally intense. 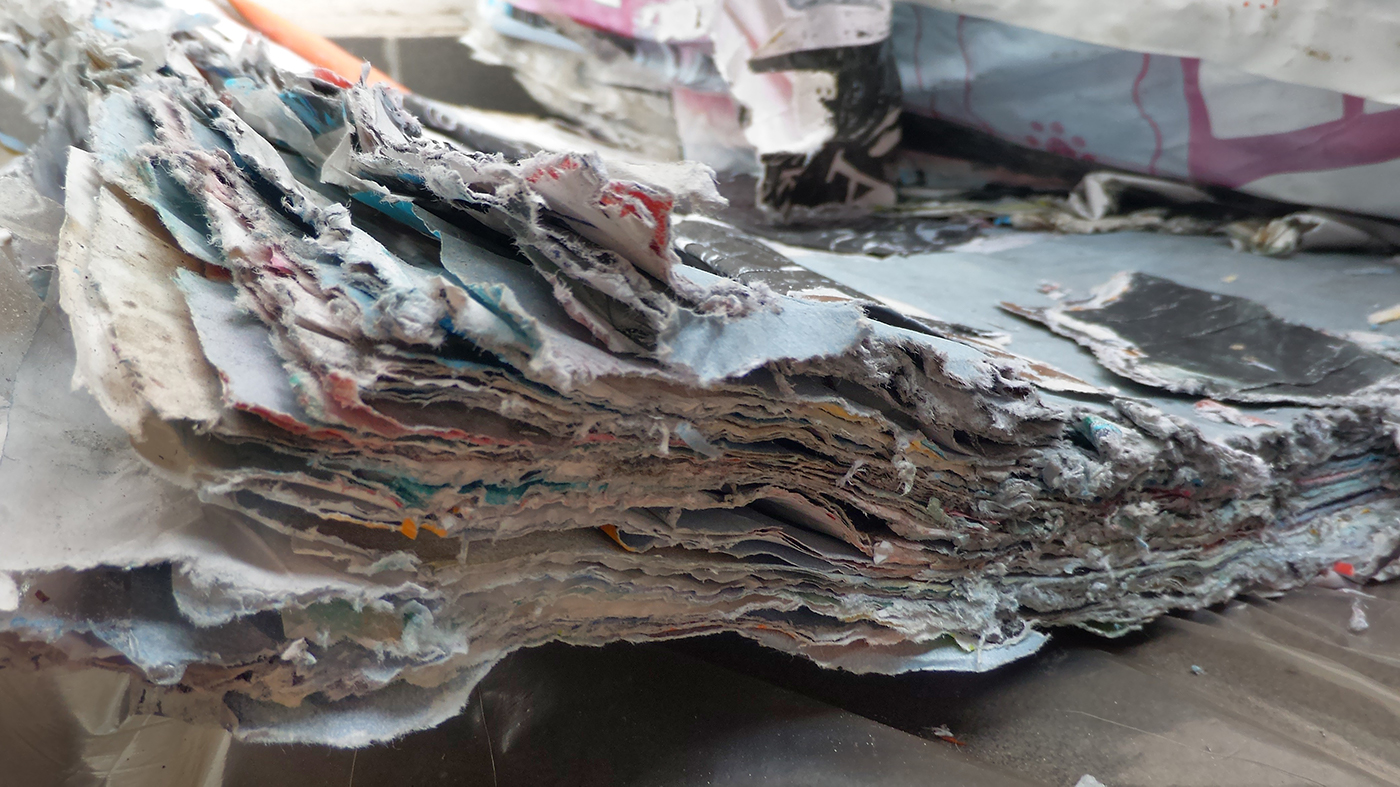 Excision of a fragment from the entire roll. Disinfection. 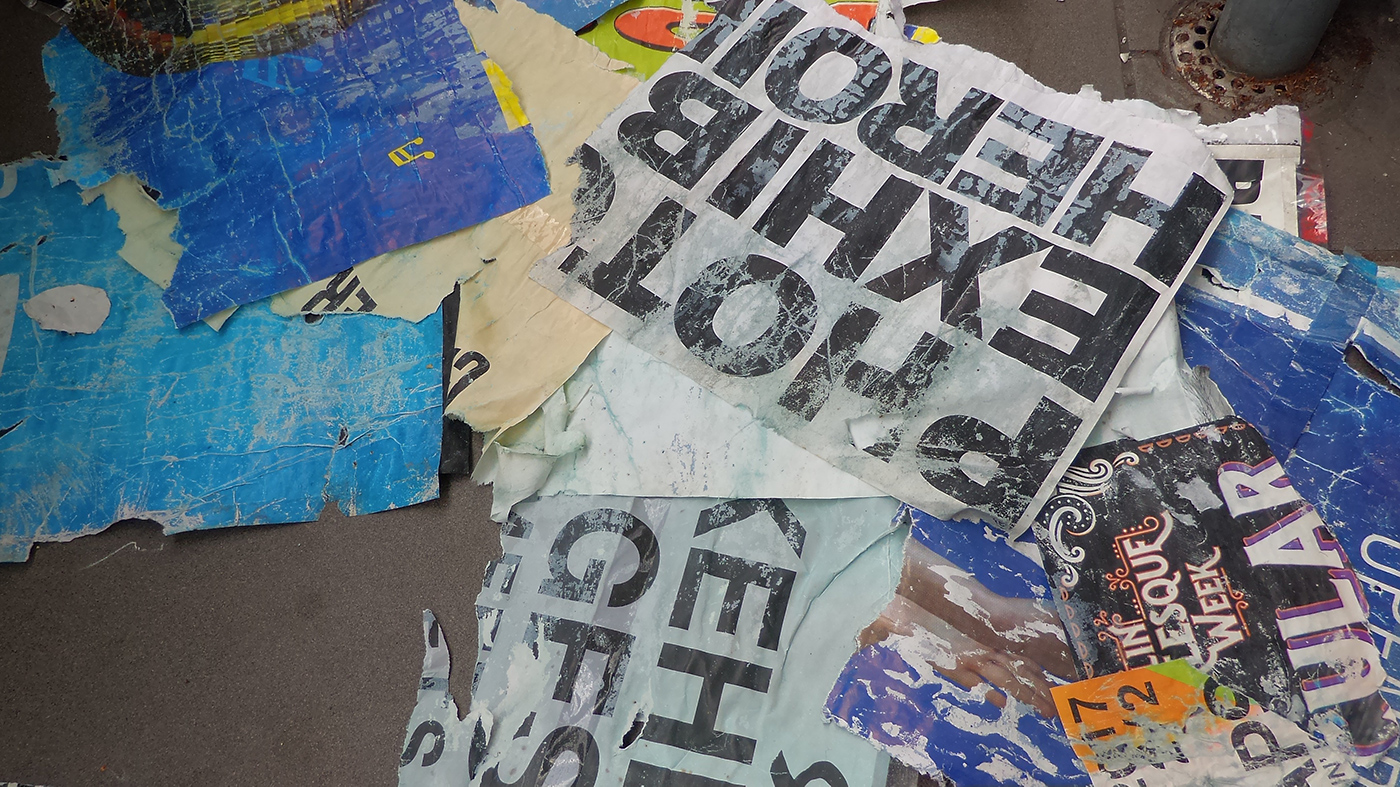 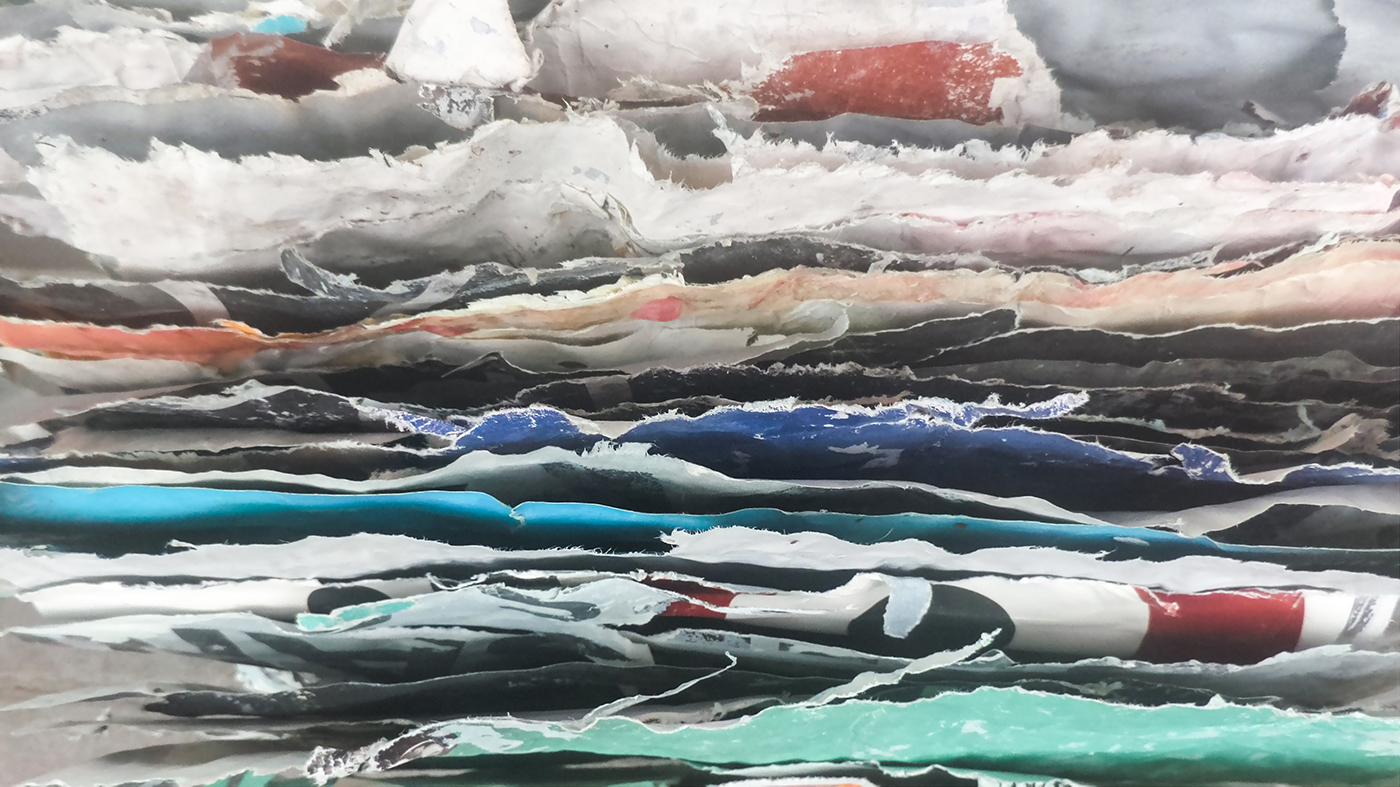 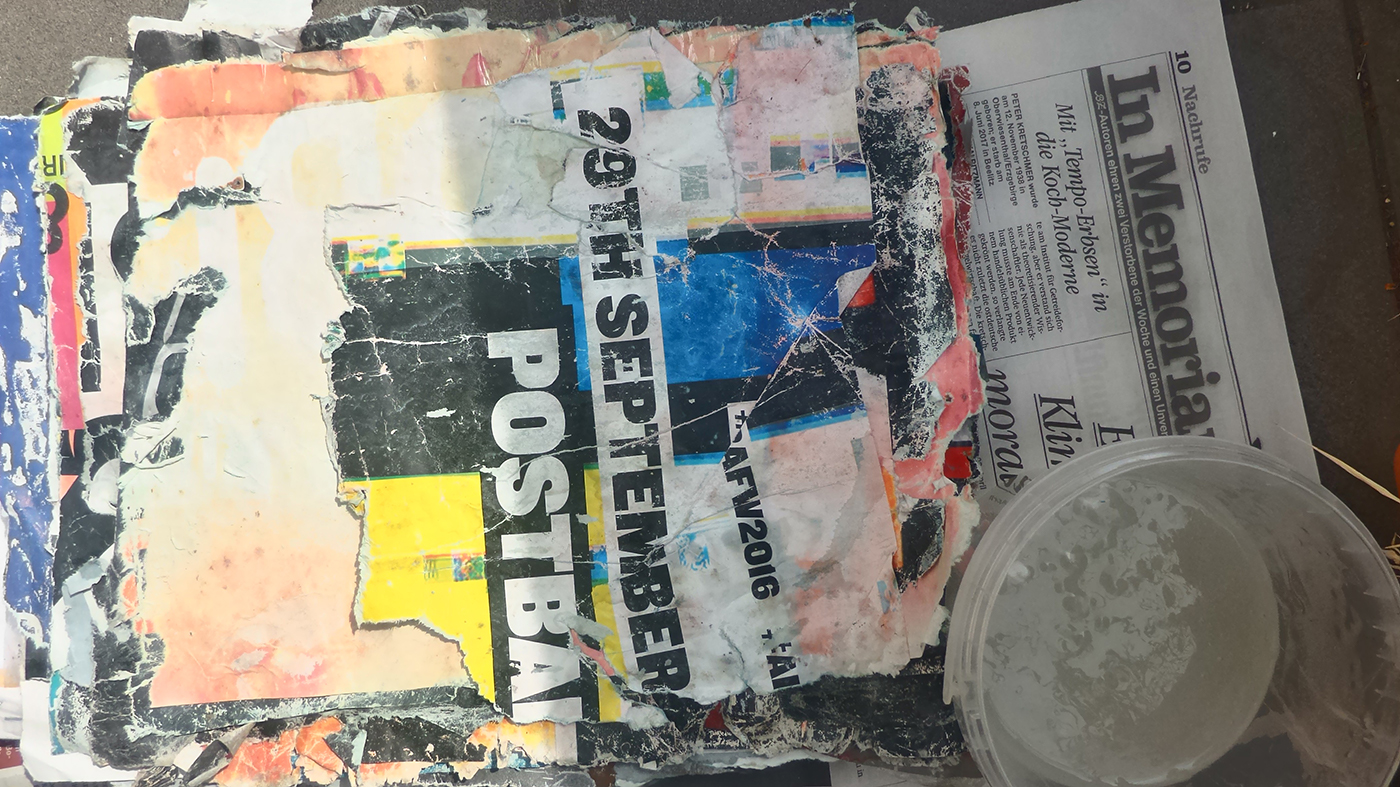 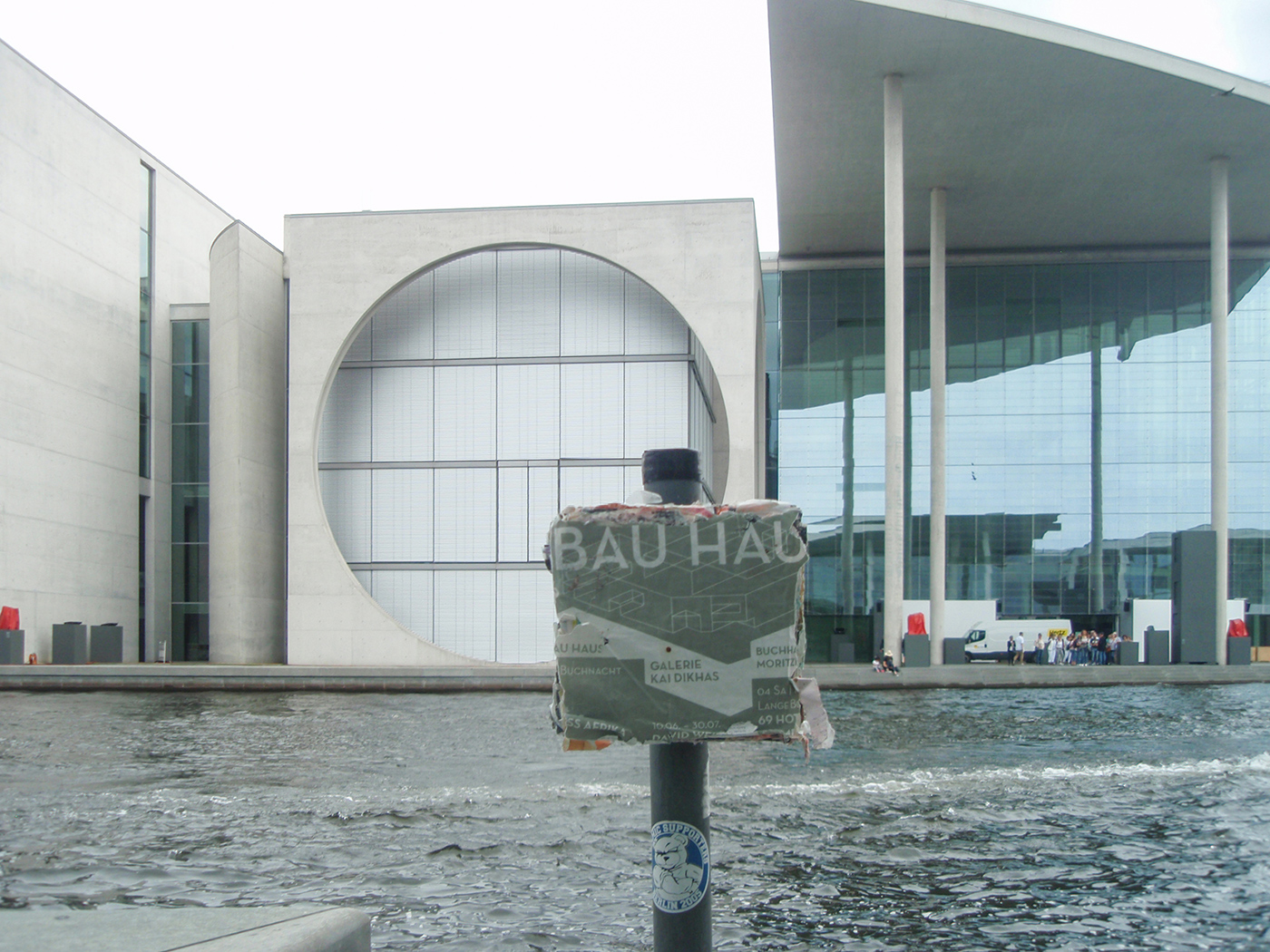 A small, portable object in a representative part of Berlin, an almost visually sterile space. Odor of the object almost unchanged. 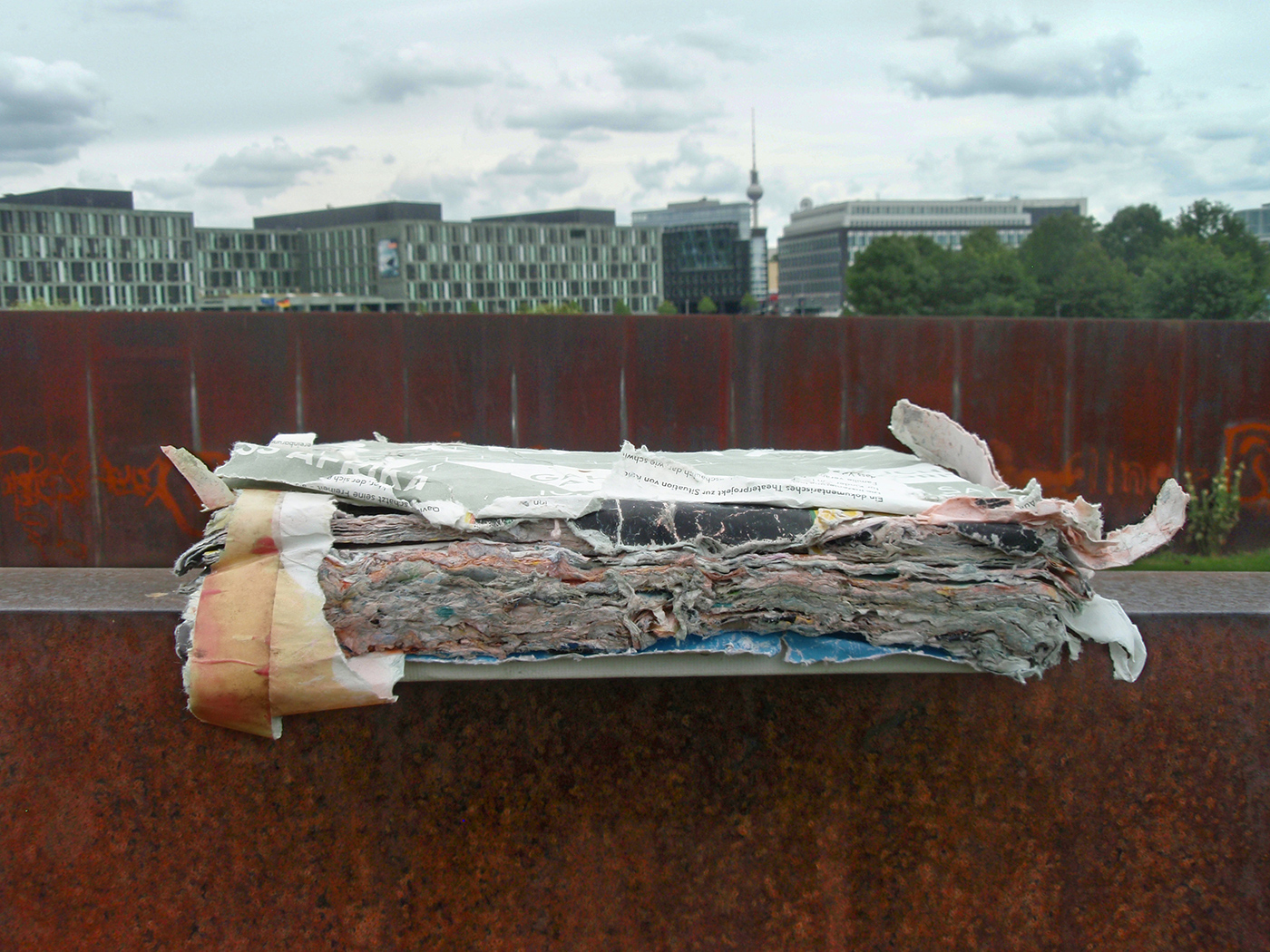