I have lived in this world for a while, I have a varied baggage of experiences, but such an intensity of difficult and bad things – I do not remember. It started two years ago. I made a note in my calendar: “2020 – the year, the future was cancelled” without even knowing what would happen next. In retrospect, that sentence – the title of an article in “The Economist” at that time – turned out to be prophetic.

So far, at least, I have the impression that the amount of horror and stress we are experiencing in relation to current events is the snowball effect of a further downward slope. The pandemic, the senseless deaths of migrants on the Polish-Belarusian border, the war in Ukraine, the unfolding climate catastrophe about which it has temporarily become quiet….

This is enough to make our psyche, immersed in everyday life built of unpredictability, instability, traumatic events and death of many people, here and now, in the 21st century, not far away, unable to cope with everything. And what if, on top of the social and political background, which is already very dramatic, we add personal problems and stories, which do not have to be of a lighter caliber? Especially if it is our responsibility, decisions and actions that are crucial. Where do we find the energy and strength to cope with the long-term, ongoing stress caused by the death, illness of loved ones and the need to care for them? Additionally, more situations erupt and crises accumulate. Currently I have counted eleven interpenetrating fields of imbalance, those concerning all of us as well as personal ones. Of course, everyone has them, but not everyone’s level of burden exceeds all limits. The present is like a cacophony of alarm signals turning on simultaneously or one after another, sometimes in small intervals. As we try to face them, we must be aware that the process of coping with change is a long-term one.

As a matter of fact, each of the eleven difficult levels I was able to point out is a separate story, a story that needs to be developed. They are accompanied by feelings of terror, paralysis and helplessness. Sometimes anger – which is good, because it can be followed by action. Worse is the feeling of collapse, hopelessness and impossibility.

The installation “Entanglement” consists of a cotton painting canvas primed in white, crumpled and then hung by one corner. The form resembles a crumpled, hooded human silhouette or a tent that you can look inside. The white, primed side of the canvas was left untouched. On the other, inner side, a painting has been painted. Its expressive background consists of four patches of color – these are areas of distress that affect us all. The personal areas of loss, struggle, anxiety and crisis are geometric, translucent, bright planes that overlap and interact with the color patches as well. The entire piece is punctuated by a simple lemon-green line, which is the backbone and also the support that maintains stability. On the floor, inside the “tent” there is a mirror reflecting the space. In this way something like a tunnel is created, in which the viewer can also look through (look inside himself?). 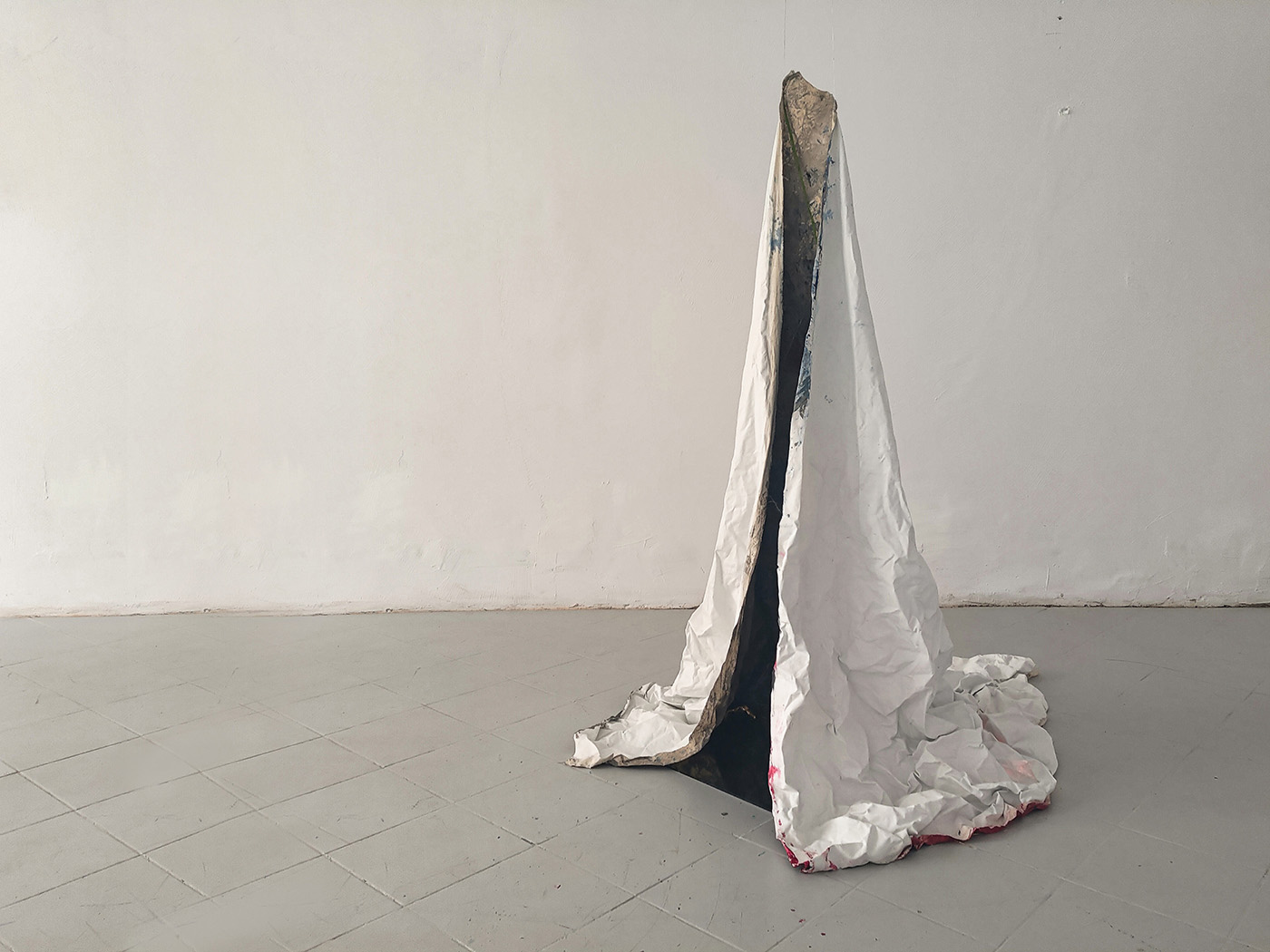 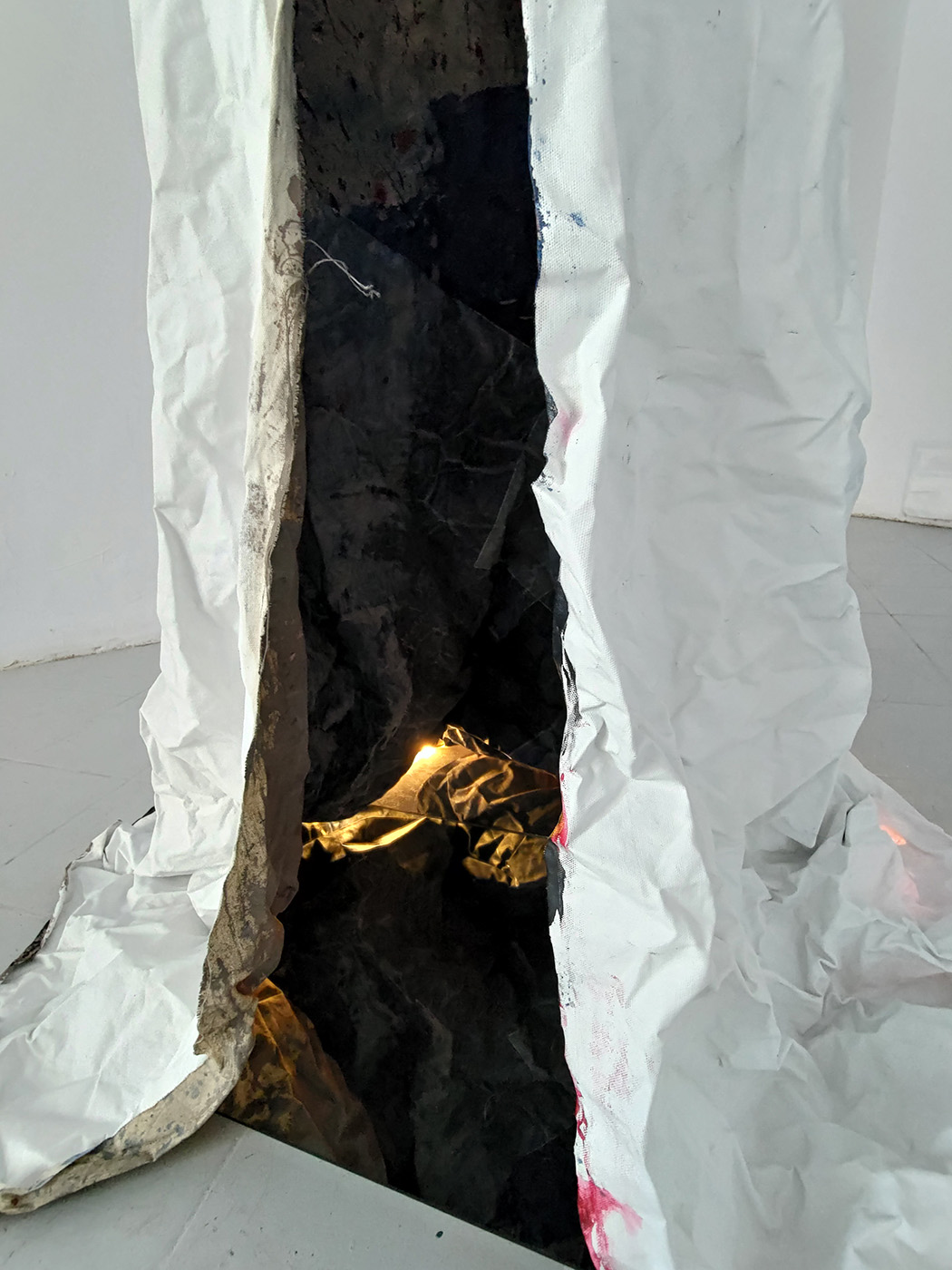 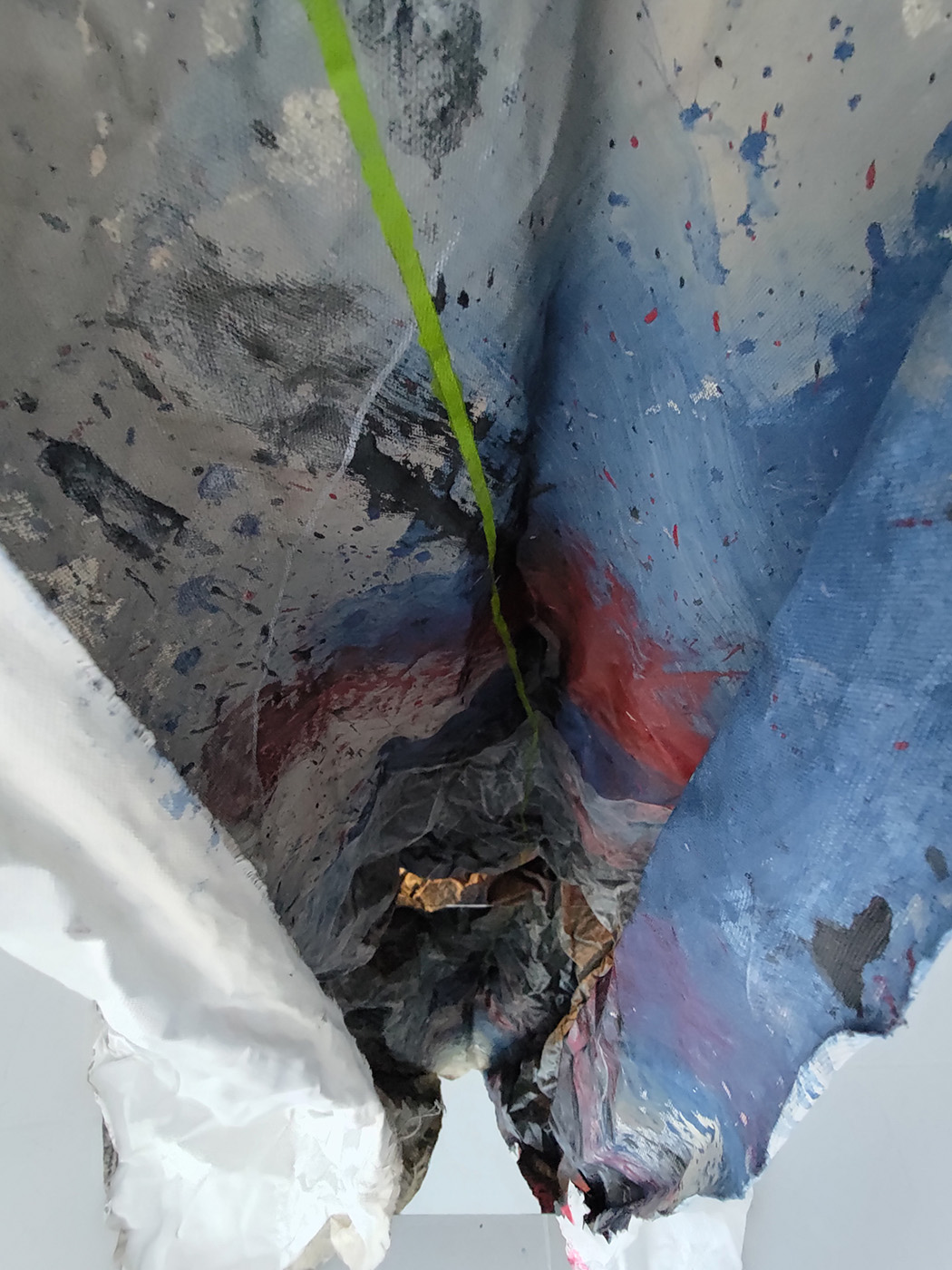 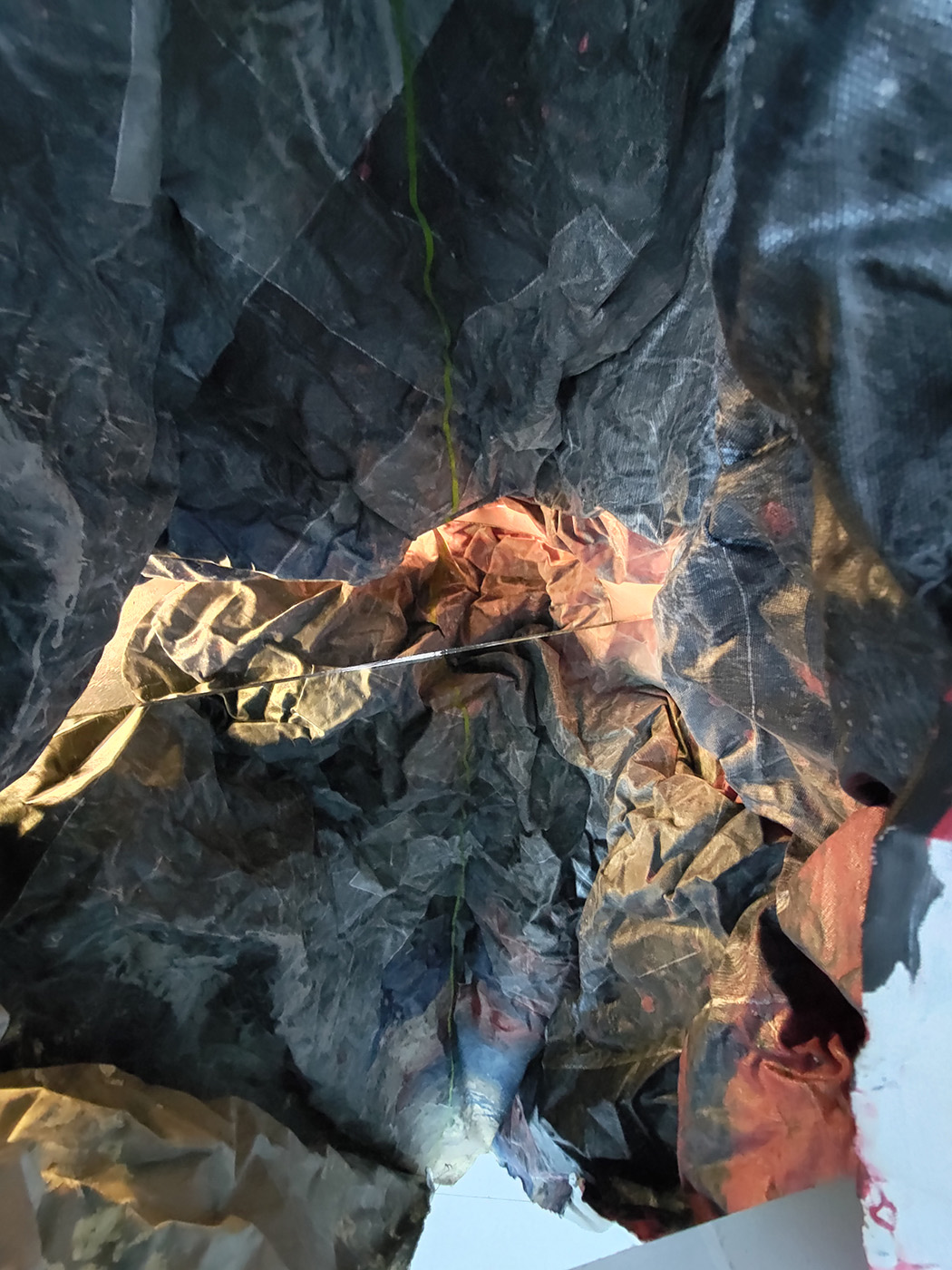 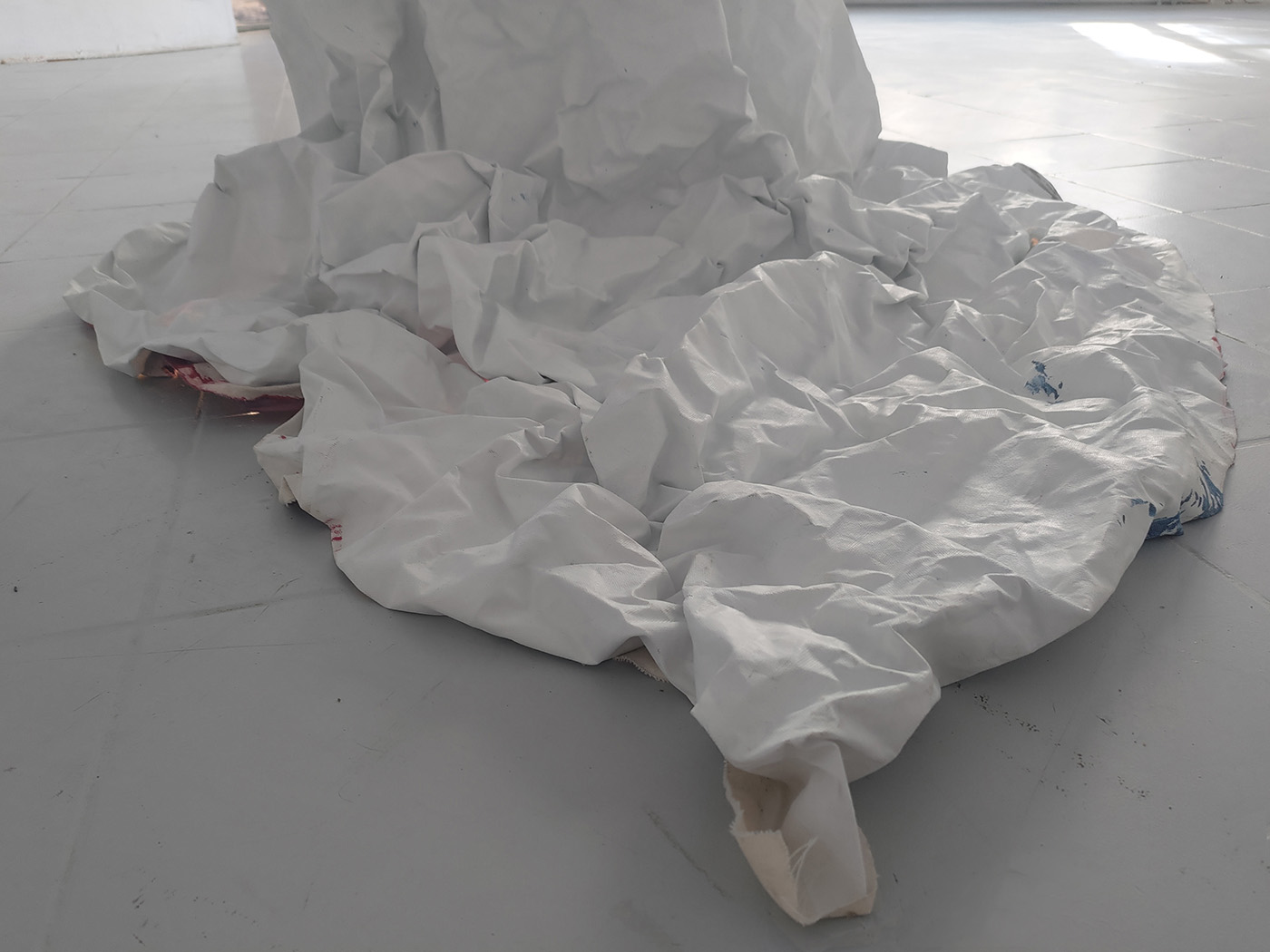