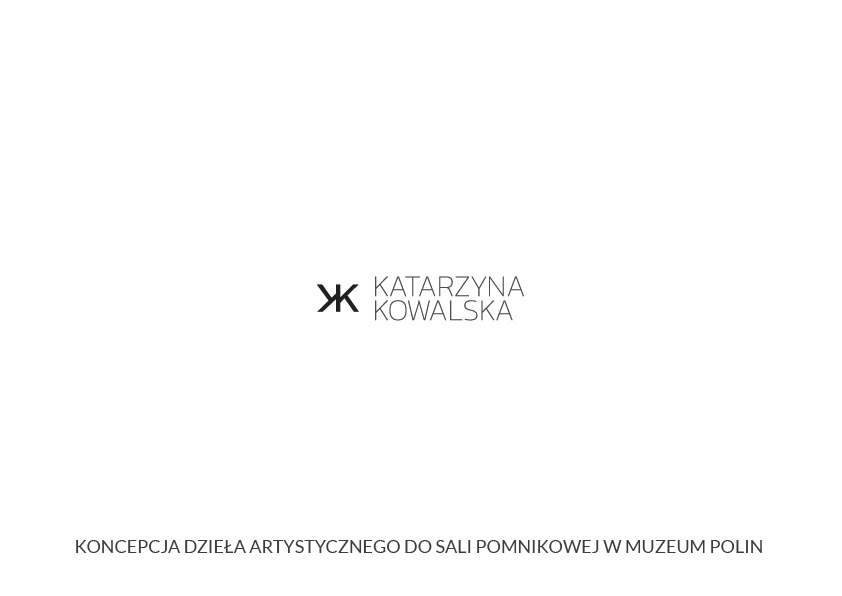 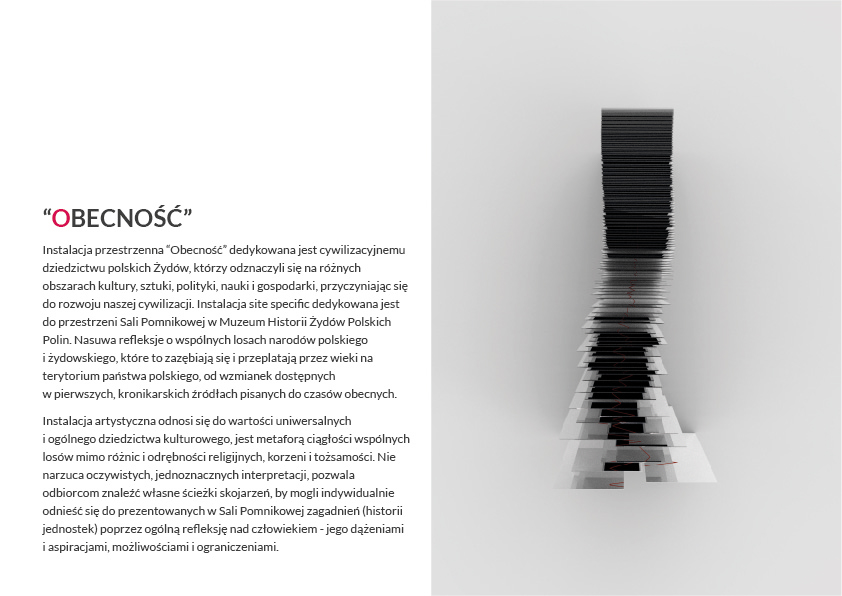 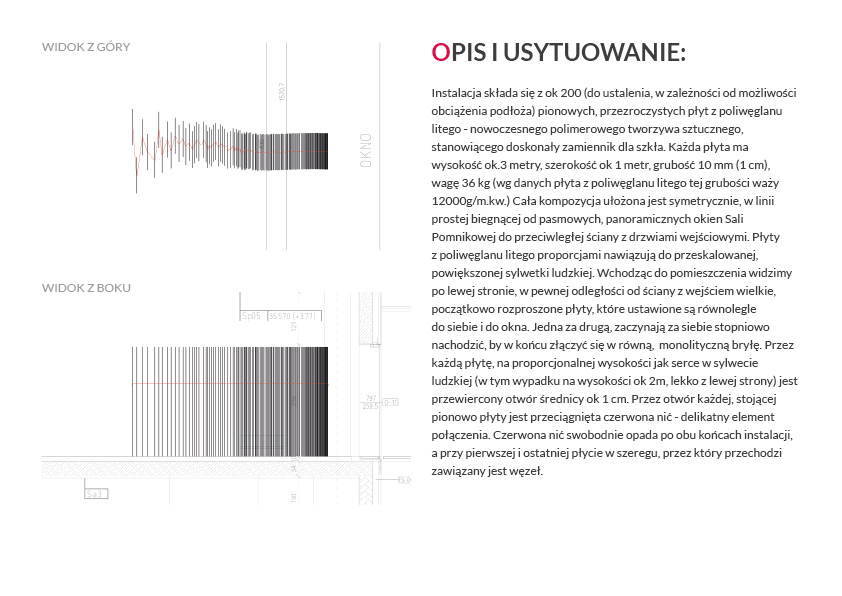 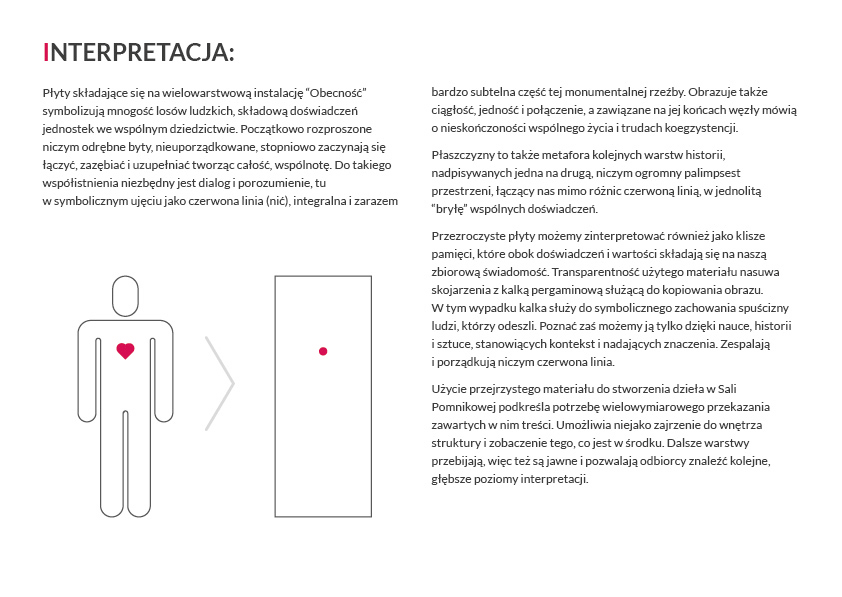 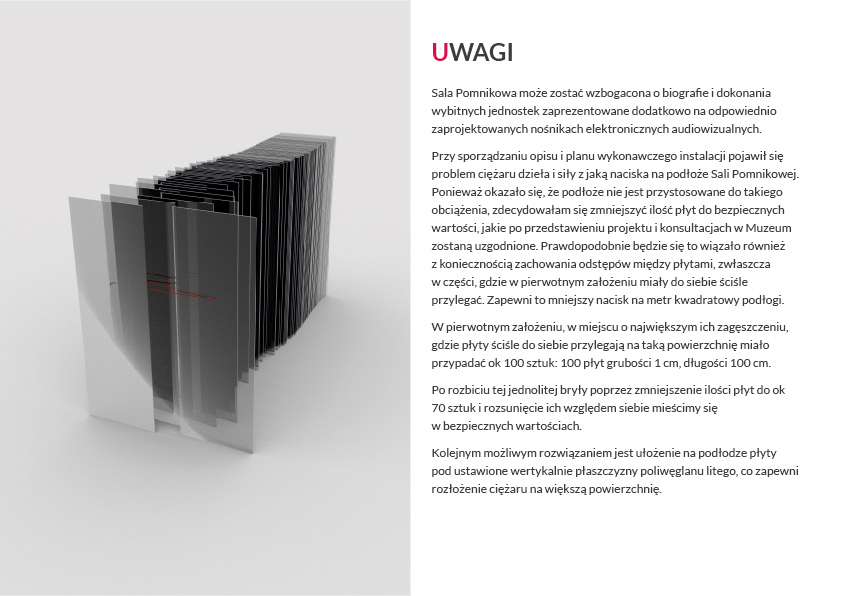 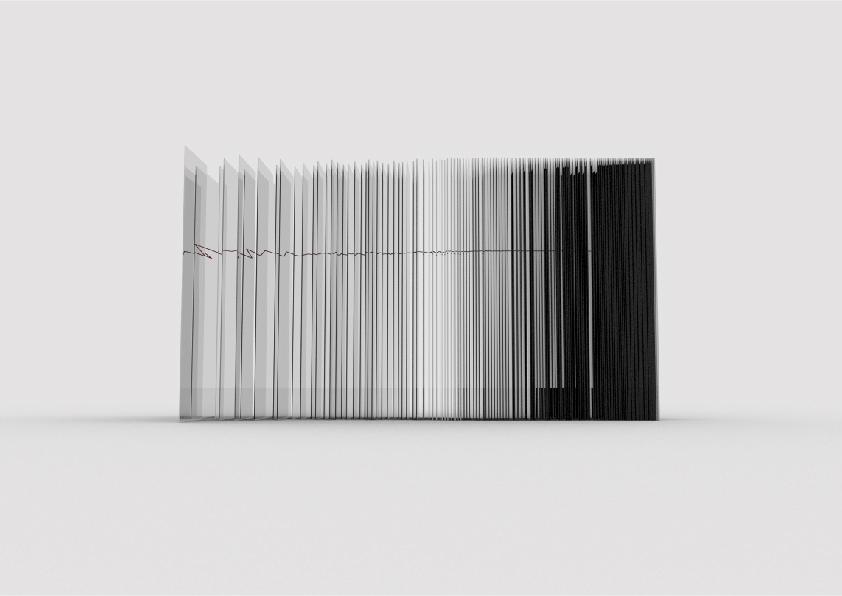 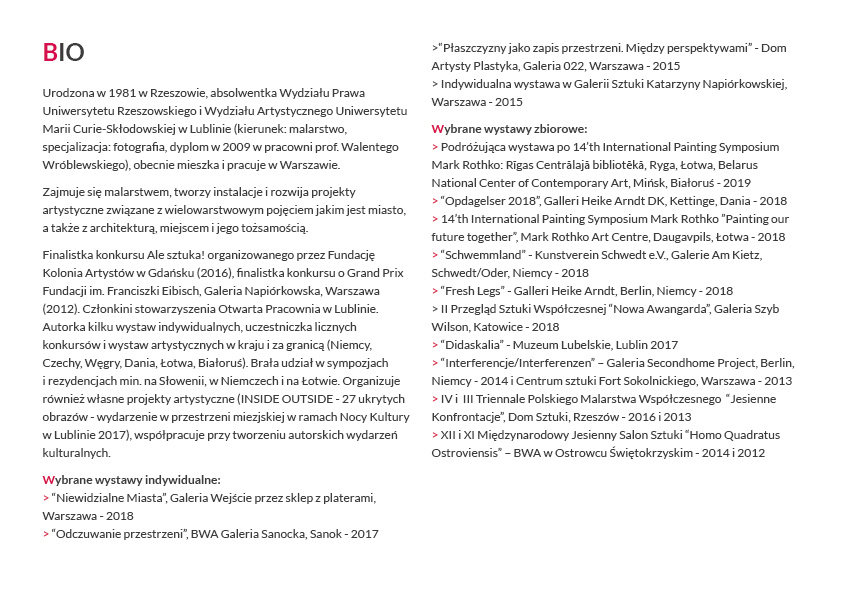 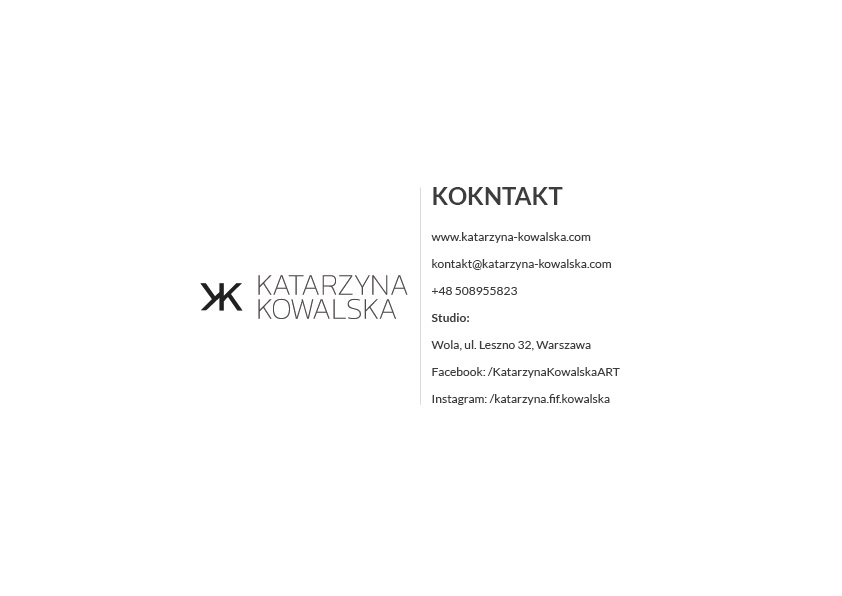 We are open to various means and artistic media (installation, painting, sculpture, film, photography, new media, etc.).
This work should be spectacular, eye-catching, arousing curiosity and encouraging deeper interest in the subject.
The spatial installation “Obecność” – “Presence” project is dedicated to the civilization heritage of Polish Jews who participated in various areas of culture, art, politics, science and economy, contributing to the development of our civilization.

The site specific installation is dedicated to the Monument Hall at the Polin Museum of the History of Polish Jews. It brings reflections on the shared fate of the Polish and Jewish nations, which have mingled and developed together on the territory of the Polish state for centuries, from the mentions available in the first written chronicle sources to the present day.

The art installation refers to universal values and general cultural heritage, it is a metaphor for the continuity of shared fates despite differences and distinctiveness of religions, roots and identities. It does not impose obvious, unambiguous interpretations, but allows the audience to find their own paths of associations so that they can individually address the issues presented in the Monument Hall (the history of individuals) through a general reflection on humans – their goals and aspirations, their possibilities and limitations.

Description and location:
The installation consists of about 200 (to be determined, depending on the load capacity of the floor) vertical, transparent solid polycarbonate plates – made from a modern polymer plastic, which is an excellent substitute for glass. Each plate has a height of approx.3 meters, width about 1 meter, thickness 10 mm (1 cm), weight 36 kg (according to the data, a solid polycarbonate plate of this thickness weighs 12,000 g / m2) The entire composition is arranged on the axis of symmetry, running from the banded, panoramic windows of the Monument Hall to the opposite wall with the entrance door. Solid polycarbonate panels refer to the scaled, enlarged figure of a human being. Entering the room, on the left side, at some distance from the wall with the entrance, we see large, in the first part of the exhibition scattered, plates, which are arranged parallel to each other and to the window. One by one, they gradually overlap with one another and finally merge into an even, monolithic block. Through each plate, at a proportional height as if at a human heart (in this case at a height of about 2 meters, slightly to the left), drilled is a hole of about 2 cm diameter. A red thread is pulled through the hole of each vertically standing panel – a delicate element of the connection. The red thread flows freely at both ends of the installation, and a knot is tied at the first and last plate of the row through which it passes.

Interpretation:
The plates that make up the multilayered installation “Obecność” symbolize the multitude of human lives, a component of the experiences of individuals in their shared heritage. Initially scattered like separate beings, disordered, they gradually begin to merge, overlap and complement to form a whole, a community. Such coexistence requires dialogue and understanding, symbolically understood here as a red line (thread), an integral and, at the same time, a very subtle part of this monumental sculpture. It also illustrates continuity, unity and connection, and the knots tied at its ends speak of the infinity of shared life and the hardships of coexistence.

The planes are also a metaphor of successive layers of history, overwritten one on top of another, like a huge palimpsest of space, connecting us, despite our differences, with a red line, into a uniform “mass” of shared experiences.
Transparent plates can also be interpreted as cliches of memory which, apart from experiences and values, constitute our collective consciousness. The transparency of the used material brings to mind parchment tracing paper used for copying images. In this case, tracing paper is used to symbolically preserve the legacy of people who have passed away. We can discover it only with science, history and art, which provide context and give meaning. They unite and self-organize like a red line.

The use of transparent material to create a work in the Monument Hall emphasizes the need for a multidimensional transfer of its content. It allows for looking inside the structure and seeing what is inside. Further layers pierce, so they are also open and allow the audience to find further, deeper levels of interpretation.

The Monument Hall may be enriched with biographies and achievements of outstanding individuals, additionally presented on appropriately designed audiovisual electronic media.

In creating the description and execution plan of the installation, the problem of the weight of the art and the force with which it presses on the floor of the Monument Hall arose. As it turned out that the floor is not adapted to take such a load, I decided to reduce the number of boards to safe values, which will be agreed upon after the project has been presented and consulted at the Museum. It will probably also involve the necessity to keep some spacing between the plates, especially in the part where, in the original assumption, they were supposed to fit tightly together. This will ensure less pressure per square meter of the floor.

In the original assumption, in the place of the highest density, where the plates adhere tightly to each other, there were supposed to be about 100 pieces per this space: 100 plates 1 cm thick and 100 cm long.

After breaking this homogeneous block by reducing the number of plates to about 70 pieces and moving them apart, we are within safe values.
Another possible solution is to place a plate on the floor under the vertical planes of solid polycarbonate, which will distribute the weight over a larger surface.